After reading this article you'll:

Roles, Positions and Groups are different ways of determining which messages players receive.
Positions are also used to establish permissions to edit an organisation's news articles.

When Should I Use Roles, Positions and Groups?

Roles and Positions ought to be determined by the team or organisation structure, whereas Groups are determined by player actions.
There is no requirement to use Roles, Positions or Groups unless your training objective demands it. Only use them if it's necessary to send specific content to specific players.

How To Assign Roles and Positions

With the Facilitator Dashboard, use Manage>Manage Teams followed by:

Using the Whiteboard, players can be moved into a Role based on clicking a Question button.
This feature can be helpful when used with Player First Login and you'd like players to select their own Roles. 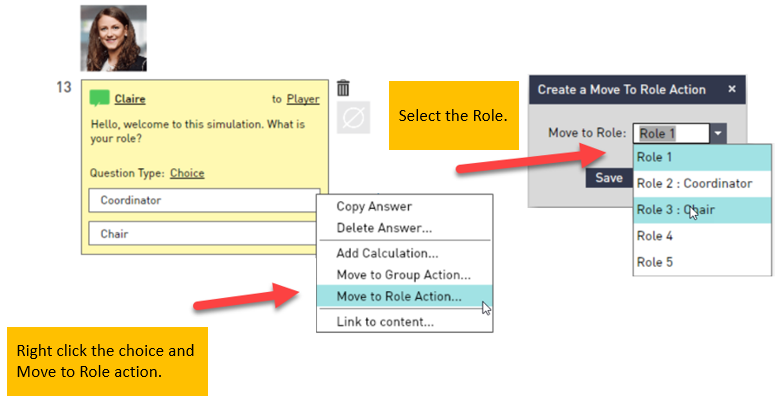 How to Use Groups

Use Groups when you need to send messages to players based on their actions or inaction.
Groups can only be created and assigned in the Scenario Editor and using the Whiteboard.
Groups are not accessible using the MEL.
There are two types of Group:
You have three Groups of each type.
Group 1 is the default Group that all players are a member of at the start of the exercise.

Moving players into a Group on Question Action

Players can be moved into a Group as the consequence of clicking a Question button. 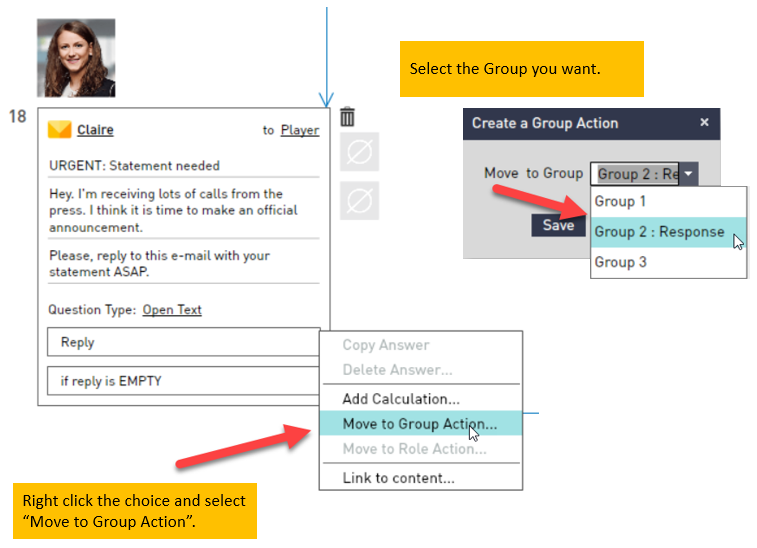 Moving players into a Conditional Group based on Attribute Value

Conditional Groups are actions attached to the Inject trigger. Players are moved into the Group based on the value of a player variable.

To publish content to players in this group, change the To setting in the content card to the correct  Conditional Group

Moving players into a Group based on Inaction

A frequently asked question is "How do I send a message to players who don't respond in time?"
A recipe for this is:
If your exercise is repeatable, you should make sure that all players are moved to Group 1 at the start of the exercise. (Add the Group action on the Inject trigger).